“Tavi is an excellent classical guitarist whose fine technique, combined with depth of feeling communicates wonderfully to his audience. His strengths are considerable, among which are a deep love for the guitar, remarkable discipline and motivation, and good musical instincts that give him advanced abilities to interpret the music.”

It’s All About People

Teaching guitar has always been about people. The joy that comes from seeing my 85-year-old student produce a clear sounding bar chord can hardly be quantified. The empowering impact the guitar can have on a withdrawn teenager or its ability to help someone who is going through a rough patch, is what makes playing and teaching the guitar worthwhile. It is ultimately about people and not about the guitar itself; the guitar without people becomes nothing more than a strung up piece of furniture. In my own experience, I forgot most of the actual notes my mentors played on the guitar, but their personal impact on my life is indelible.

I started playing the guitar at the age of thirteen when my father told me that I needed to have an extra curricular activity. In a slow vocal cadence he told me that I had to choose between Romanian folk dancing and playing the guitar. Somehow, the prospect of wearing leggings and jumping around in awkward musical movements did not sound that enticing to a thirteen-year-old skinny boy. So, I guess it had to be the guitar. From the first encounter with the guitar I resonated with the instrument. I loved the way it felt underneath my fingertips (yes, even when they were throbbing with pain) and loved the sensation of strings as I plucked them. A few years prior to this I had tried to play the accordion at the insistence of my father but failed miserably. However, I had always been charmed by the guitar. My uncle was a guitarist and I remember that as a young child I snuck into his bedroom and strummed the guitar with all my might, only to then run away as fast as I could in hopes of evading the repercussions.

I began playing the guitar in the church’s children choir. I was fascinated by any guitarist, no matter what style he or she was playing. I became a sponge absorbing every solo line I could from Joe Satriani and every interesting chord from George Benson. My journey with the guitar took a significant turn at the age of sixteen when, for the first time, I heard the lush tones of a classical guitar. The guitarist played for me Lauro’s Natalia waltz. I was struck 3 seconds into the piece by the natural harmonic played on the second string. “The tone, the tone, the tone!” was what I kept on saying to myself. I knew it right then and there that I had to play the classical guitar.

There was no classical guitar teacher in my hometown and my friend Rares, at that time a conservatory student in Germany, began teaching me to play the instrument whenever he visited Romania during his school breaks. Without much supervision I was largely self-taught and, as one can imagine, I had developed many poor playing and practicing habits. But who cared? I loved playing it and there was nobody else in my hometown who played the classical guitar that I had to worry about impressing. I began devoting every minute I had to the study of the guitar. I began thinking about guitar playing all the time and was solfeging every musical piece I knew. I was now customarily practicing bar chords using my right forearm as a pseudo-guitar fretboard. It started to get a bit out of hand but the guitar world was a great escape for me, otherwise a shy and rather withdrawn boy.

A year later I was invited to tour the US with a band from Hungary. During this tour I played a composition on the classical guitar with some flamenco influences; nothing really to brag about. Perhaps it is helpful to mention I had to borrow a guitar for this tour as my parents could not afford to purchase one. It was during this tour that a kind gentleman gave me a Yamaha classical guitar that he stored in his closet and had never used. Humble beginnings are wonderful, and I mention this in hopes that you would be encouraged to press on regardless of your own humble beginnings and limited options. It is amazing to consider the opportunities that came from nowhere, opportunities  that brought a poor gypsy boy from Romania to tour half of America.

The Influences of Segovia and Parkening

It was during this U.S. tour that a kind hearted lady named Janice recorded one of the concerts and sent that recording to various classical guitarists in the U.S. One of those recordings got into the hands of the American guitar virtuoso and now wonderful friend, Christopher Parkening. Upon my return to Romania, he kindly surprised me by sending me an encouraging letter, cassettes and a bunch of sheet music. This initial contact would turn out to be a life-altering event. I was on my way to going into law but I was now inspired more than ever to pursue excellence in playing the classical guitar.

Over the coming months I recorded myself playing and sent the recordings to Christopher Parkening. He provided brief but valuable advice on hand positioning, nail shape, repertoire choices and so on. After a few months I told him that I would very much like to study the classical guitar but that prospect would be very unlikely in my country as there was virtually no guitar tradition. Parkening kindly mediated a deal whereby he would become the guitar chair at the Master’s College in Santa Clarita, CA if the college would financially make it possible for me me to study there under his tutelage. The deal went through and everybody won. The college now had the world’s preeminent classical guitarist chairing the guitar department of 1 student. I also won big time by becoming the one student in the department. As for Christopher Parkening, actually I am not sure what he won; not very much at all, as he even returned his paychecks to the Master’s College. This act of generosity eventually transitioned into a guitar student grant that is awarded each year. I was also fortunate to study under the instruction of John Nelson, Christopher Parkening’s associate. John also made a deep impact on my guitar playing as well as my personal development.

In 2003 I graduated from the Master’s College with a degree in classical guitar performance. After graduating college I became interested in other fields of study. I pursued and received graduate degrees in theology and classical philology. Throughout all these alternative pursuits, the guitar remained a constant companion and I found myself over and over gravitating towards it. Over the years I became increasingly busy with my performance schedule and decided to accept the Master’s College invitation to chair their classical guitar department in 2009. I have also enjoyed privately teaching a broad range of students over the years ranging from 5 to 85 years old, ranging from absolute beginners to advanced students seeking admittance into various graduate guitar programs across the country. Teaching is enjoyable and rewarding because I get to see the musical transformation taking place in my students, their increased enjoyment of life and their personal development.

It is the same passion for people that led me to start EliteGuitarist.com The guitar is meant to help and better people. Over the years I have become increasingly dissatisfied with the current state of the classical guitar and how cliquish it has become. Unlike the times of Segovia, Williams, Bream and Parkening the guitar is now generally isolated to competition stages and guitar festivals. Guitarists these days play for other guitarists and the beauty of the classical guitar has little appeal to the general musical community.

My goal is to enlarge the community of the classical guitar and provide teaching that would draw players of other styles into taking up this wonderful instrument. My approach to teaching the guitar is steeped in the musical traditions of Andres Segovia and Christopher Parkening while at the same time it embraces the current trends in technical development and repertoire. For the guitar to again find a prominent place on the large concert stages of the world, guitarists need to adopt a different approach to playing the instrument. It is not enough to play it with a clinical and immaculate technique; we need to play the instrument beautifully. It is not the technical aspect of the guitar that appeals to me but rather it’s beauty. Andres Segovia said “The beauty of the guitar lies in its soft and persuasive voice and its beauty cannot be equaled by any other instrument.” If you are ready to approach your playing of the classical guitar in the same way, welcome to http://www.EliteGuitarist.com. It is great to have you here!

I often wonder why the passing of significant artists, especially guitarists, has such a deep impact on me. In the case of Roland Dyens, his guitar artistry has been an important formative force in my development as a guitarist and his compositions/arrangements have left an indelible mark on the way I analyze and enjoy music. I suppose it is normal to feel a deep sense of loss when such an artist dies even thou the relational connection may be at the level of acquaintances. Over the years I have internalized his music to such an extent that in a very real sense I feel a deep level of connection with him, even though we only met once.

Several years ago, as Roland Dyens was touring throughout Southern California, Guitar Salon International organized a master class with the maestro. I have always wanted to take a lesson from Roland and this was the perfect opportunity. I am so glad I did and got a chance to interact with Roland shortly before his passing. I was so musically enriched by Roland and these are some things that stand out to me as I recall that special time.

Roland had a contagious enjoyment of music and enjoyed trying to get in the composer’s mind. Unlike most classical musicians, he was incredibly relaxed with the score and made statements of the sort: “the composition is not completed until you, the guitarist, perform it.” He was warm and kind and there was no air of superiority or egotism in his instruction. He focused fully on his students and instructed with generosity of heart and winsomeness. As I recorded this tutorial, I am again reminded of how much I miss Roland. Let’s keep his memory alive by enjoying and playing the vast amount of music he left for us.

Guitar Nails: a riddle wrapped in an enigma. One size does not fit all but here is Tavi Jinariu’s approach to filing and repairing nails for optimum tonal quality. 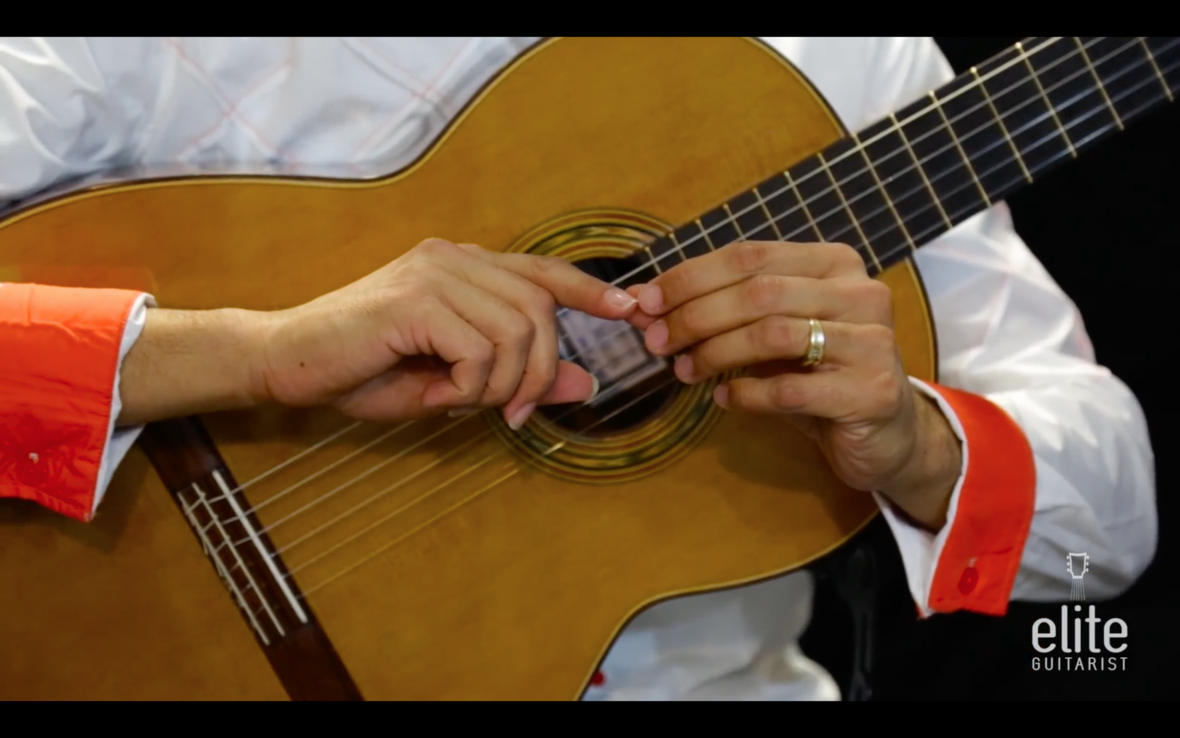 Many of you have been requesting a tutorial on how to properly file your nails and achieve great tone. Playing with great tone is a combination of careful nail filing/polishing and plucking technique.

These may be the strangest videos you have seen on www.EliteGuitarist.com to date. If you can deal with the weirdness of watching a dude file his nails for 10 minutes straight, you will likely derive some benefit from these general nail-filing principles. In the end, if we cannot make it in this world as concert guitarists, surely we stand a chance to open some of the best nail salons in town.